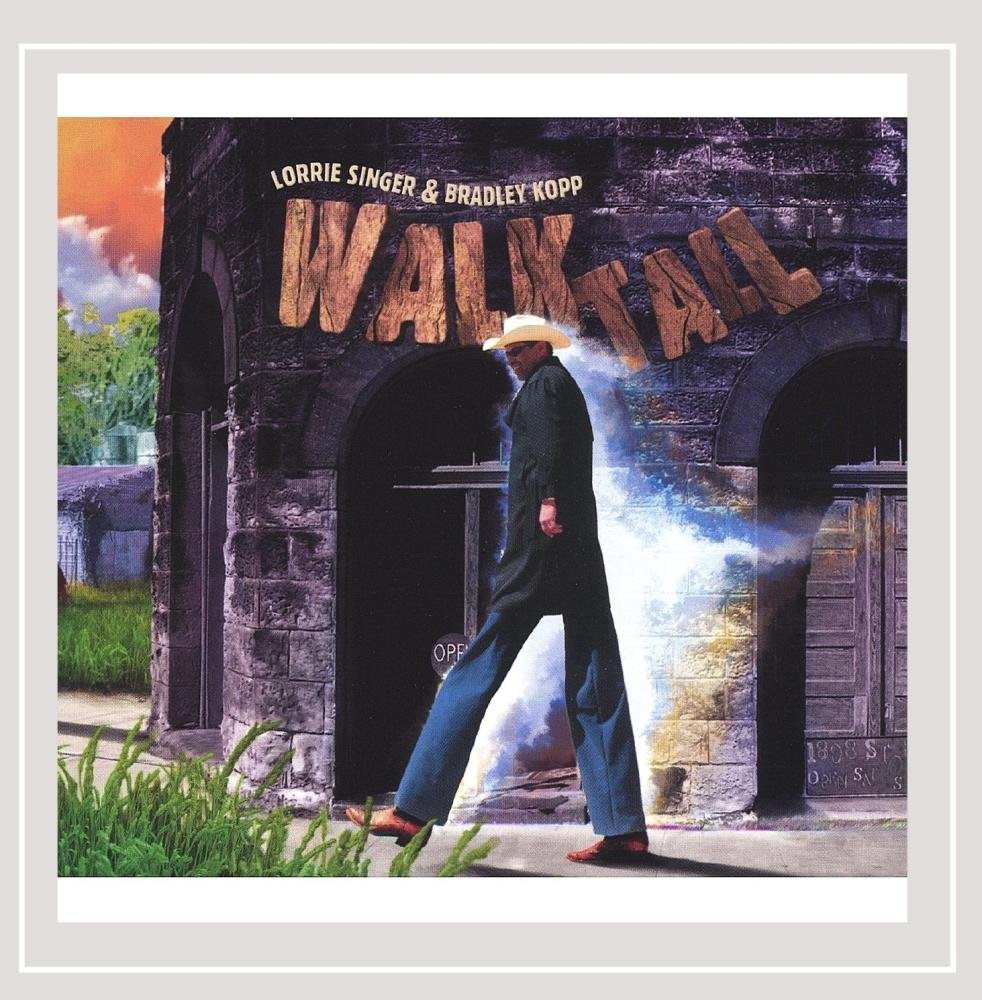 LORRIE SINGER amp; BRADLEY KOPP Walk Tall Bradley Kopp and his wife, Lorrie Singer, have extensive professional pedigrees: He's a guitarist gun-for-hire and a producer and engineer with extensive credits under all three categories; She's a vocalist, both in her own right, in show bands and on sessions by other artists. Walk Tall, their first "official" collaboration, blends soul, pop folk and country, and features songs by friends and peers, including established Nashville hitmakers (Julie Miller, Gretchen Peters) and "family friends" (Jon Ims, Freddie Krc, Michael Woody) from their extensive circle of songwriting friends in Texas and Colorado. The songs showcase Kopp's agile guitar workmanship and Singer's elastic, malleable voice. Depending on mood, inclination and the tilt of Singer's voice, the individual tracks on the album can tend towards sunny ("Rachel"), introspective ("'67 Pontiac"), rocking ("Backslider"), wistful ("As Far As Your Memory Goes"), pensive ("River Don't Rise") or soulful ("Saving My Sugar"). Listeners coming across Walk Tall for the first time might be forgiving for hearing echoes of Mary Chapin Carpenter, Patty Loveless, Karla Bonoff or even Bonnie Raitt in the robust vocals and eclectic, ear-tugging arrangements. Bradley Kopp hails from West Texas,, but moved to Boulder in 1973, where he fell into a fertile Colorado music scene that included musicians from Firefall, Navarro (Carole King's backup band), Poco, the Flying Burrito Bros. and a host of kindred spirits. Moving to Austin in the early eighties, he assembled an impressive list of credits as a guitarist (Alejandro Escovedo, Charlie Robison, Jimmie Dale Gilmore, Jimmy LaFave), as a producer (Fairport Convention's Iain Matthews, Jeff Talmadge) and as an engineer (Joe Ely, Ray Wylie Hubbard, Tish Hinojosa). Lorrie Singer grew up in Houston listening to legendary Bayou City acts like Joe Tex, Roy Head, and the 13th Floor Elevators. After getting some recording experience under her belt in Houston, Singer moved to Boulder, CO, where she met Bradley Kopp in 1978. She also crossed paths with the likes of the Eagles' Joe Walsh, Rick Roberts (of Firefall and the Burrito Bros.), Mark Andes and a host of songwriters that included Jon Ims, Gretchen Peter and Michael Woody (all of whom would go on to contribute songs to Walk Tall). She also worked as a session singer (including a duet with John Denver) and on television commercials. Singer and Kopp lost touch with one another in the mid-Eighties after the latter returned to Texas. But in 1996, says Kopp, he found a picture of singer (that she had slipped him when he wasn't paying attention!) and picked up the telephone. The pair were married in 1997 in Colorado. A new production gig in Austin brought Kopp and Singer back to Texas in 1999, where they set up a home in the small town of Buda and studio in nearby Wimberley, a small artists' colony a few miles outside of Austin. It was there that they began to assemble the songs and record the tracks that would one day coalesce as Walk Tall.

See the technology stories that people were reading on GeekWire for the week of Oct. 24, 2021.… Read More

This week on the GeekWire Podcast … We dissect Amazon’s earnings, offering our take on Andy Jassy’s take on the company’s latest predicament. We assess a major Microsoft milestone, as… Read More

For all the hype about data (how many times have you heard “data is the new oil”?), a shocking number of business leaders are missing out on their biggest data… Read More

A crappy culture will surely slow any business down and make it more difficult to achieve goals and hit performance benchmarks. But that’s not the real problem. A toxic culture… Read More

Amazon and UCLA are launching a research hub that will draw upon industry and academic research to address the social issues raised by the rapid rise of artificial intelligence. The… Read More

Microsoft appears to be the winner of this week’s tech earnings-palooza, at least based on Wall Street’s reaction. The Seattle-area tech giant’s market value reached $2.48 trillion in trading Friday… Read More

As it waits on its order of tens of thousands of delivery vans, Amazon revealed Friday that it has a 20% stake in Rivian, the electric vehicle maker that it’s… Read More

A few days before the official magic begins at The Splintered Wand in Seattle’s historic Ballard neighborhood, it’s clear that the proprietors of the new restaurant, bar and wand shop… Read More

The availability of workers became Amazon’s primary challenge in keeping packages moving smoothly through its system in the third quarter, not the normal limiters of storage space or fulfillment capacity,… Read More

Amazon’s profits plunged to $3.2 billion in the third quarter, dropping by nearly half year-over-year, and CEO Andy Jassy told shareholders to brace for more of the same in the… Read More

Big deals have become almost run-of-the-mill for Seattle-based home services tech company Porch Group, which has been acquiring an array of companies in areas such as home inspections, moving, real… Read More

Facebook announced a name change on Thursday intended to bring together everything that it works on under a single brand called Meta, and in turn take some of the focus… Read More

Another day, another deal. That’s sometimes how it feels around the GeekWire newsroom as we track the latest venture rounds, private equity buyouts, acquisitions, IPOs, SPACs and every other transaction.… Read More

Microsoft announced a scholarship program for U.S. community colleges and other initiatives to address what it describes as a national cybersecurity skills crisis. The company says it will offer free… Read More

In an effort to sell more goods from companies run by people of color, outdoor retailer REI is launching a program to support diverse entrepreneurs producing gear for camping, hiking,… Read More

Vicis will maintain a Seattle presence, two years after the helmet maker went through a major and sudden downfall in 2019. Vicis is now owned by Certor Sports, a company that… Read More

The gist: Rad Power Bikes just raised $154 million to fuel growth of its e-bike business. The round comes after a separate $150 million cash infusion raised in February. Rad… Read More

Dental exams conducted on fossils from more than 200 million years ago suggest that the earliest true tusks were sported by breeds of weird-looking creatures known as dicynodonts. The evidence,… Read More

BitTitan, a Seattle-area cloud services provider, has been acquired by Idera, an Austin-based company that manages a portfolio of B2B software brands. Terms of the deal were not disclosed. Founded… Read More

During sleep, our brains are “cleaned.” Waves of fluid wash through the organ, collecting waste products from cells and sending them out via the circulatory system. Scientists believe this cleaning… Read More

Rivian, the electric vehicle maker that has attracted major backing from Amazon, is trying to attract more engineers in the Seattle region based on job openings posted on the company’s… Read More

Is the cost of hiring workers and bolstering its fulfillment network taking a toll on Amazon’s bottom line? Wall Street analysts are betting that the answer is yes. On average,… Read More

When Apptio launched in 2007, early employees debated whether the enterprise software startup should establish its headquarters in Seattle or nearby Bellevue. Even though the five co-founders eventually settled on… Read More

Microsoft’s global employee count grew to nearly 190,000 people at the end of the September quarter, a net increase of 23,500 people globally over the past year, or 14% year-over-year… Read More

Amazon launched its $2 billion Climate Pledge Fund in June 2020 and has already invested hundreds of millions of dollars in 11 climate tech companies. The goal of the fund… Read More

In September 2019, Amazon’s founder Jeff Bezos announced the company’s ambitious Climate Pledge, setting a goal of achieving net-zero carbon emissions by 2040. He encouraged others to do the same… Read More

Subscribe to GeekWire's free newsletters to catch every headline

Have a scoop that you'd like GeekWire to cover? Let us know.

Become a Member for exclusive benefits.