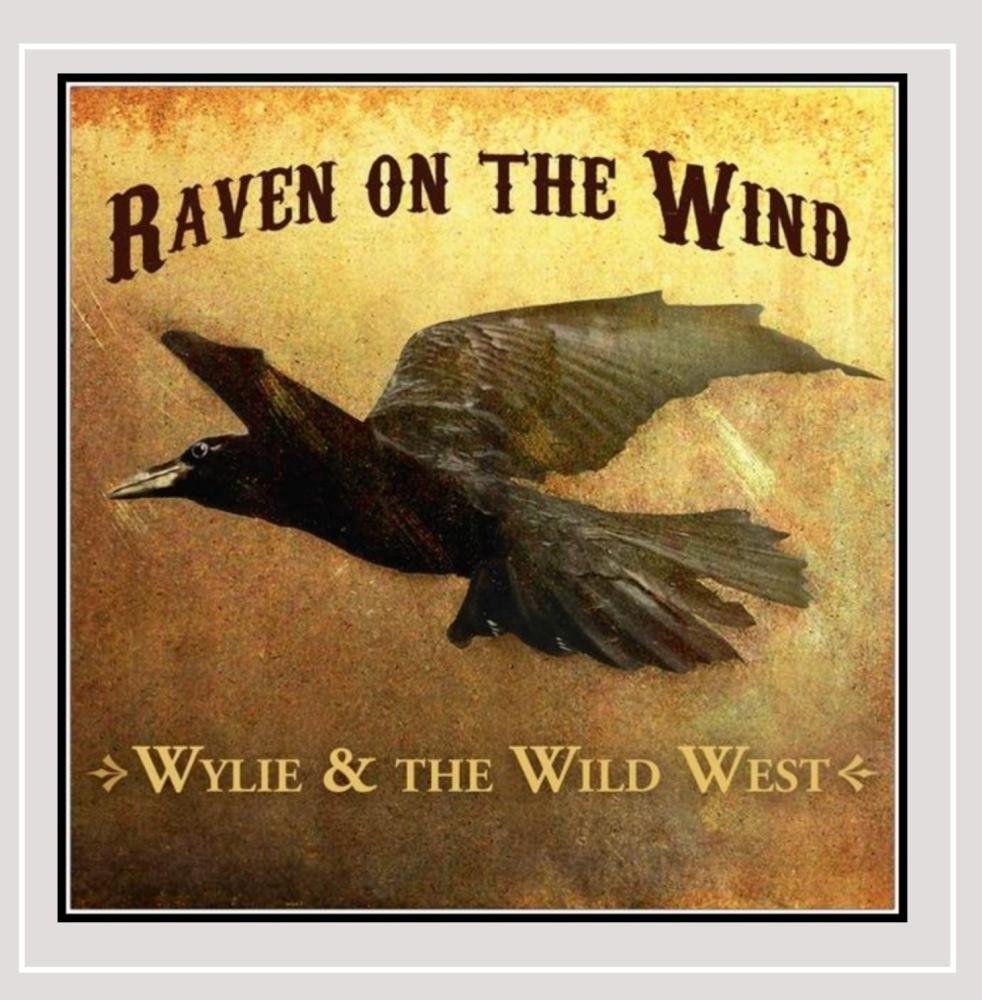 Raven On the Wind by Wylie amp; The Wild West

What folks are saying about Raven on the Wind Baxter Black, who knows how to give a compliment, has said "Wylie amp; the Wild West changed the water level in the cowboy entertainment aquarium." With the band's recent releases, they have just about set off a tsunami in that body of water. The band's latest release, Raven on the Wind, comes on the heels of their award-winning, groundbreaking Hang-n-Rattle!. Band leader, singer, and songwriter Wylie Gustafson delivers another collection that breaks down "traditional" cowboy music fences. Wylie comments on Raven on the Wind, "When I write songs, I really try to strike the balance between good old tradition and the West's innate trait of forging ahead into new territory...." He does that and more with his own skillful pieces, co-writes with master poet and songwriter Paul Zarzyski, and, get ready for it: the cover of a Mick Jagger and Keith Richards song. The gritty portrait of "Punchy," who is "half horse, half cow, half Superman" opens the album with...a punch. Wylie Gustafson himself is "half horse, half Shakespeare, half honky tonk." Few other writers can go from a steamy, intricate, and bewitching song ("The Maestro") to a "Hi-Line Polka" to an ethereal piece ("Wild Mustang") and do it all so masterfully: the writing, the music, the performance. You want to listen again and again, chew on it, think about it, live with it, and be a part of the truth of it. Who is Wylie amp; the Wild West's audience for their revolutionary work? Everyone. Raven on the Wind will blare from run-down cars on the rodeo trail, play in the truck-stop cafe, spin in Boomers' CD decks, and be on iPods everywhere. The audience is people of all ages from all places who care about listening to good music that has something to say with intelligence and fierce style. Wylie has a broad and certain vision of the West and its music. He comments in the liner notes, "I still hang out with some of the toughest ranahans in cowboydom. When I peek into their CD collections, I am always amazed... It's an ever-eclectic mix of sounds and soul. To me, that is what the West is all about. Out here, to be an individual is the highest calling....Our life is unpredictable. It's wild, it's laid back.... it's Classical, it's a waltz, it's fast and furious, it's Rock n Roll, and everything in between." Raven on the Wind is Wylie amp; The Wild West's 16th album. It is produced by notable Nashville musician and recording artist Dennis Crouch, and Wylie is backed up by an impressive stable of outstanding musicians throughout. --Margo Metegrano, Editor CowboyPoetry.com

Wylie Gustafson is that renowned Yahoo! yodeler, but you won't hear yodeling on his and his band's new "Raven on the Wind." The Maestro, in contrast, is drenched in soul, while Rip This Joint is saturated with rockabilly vibes. About the only song that even remotely utilizes the upper range of Gustafson's yodeling voice is Hi-Line Polka. Elsewhere, Gustafson sounds like a campfire cowboy dispensing wisdom during the acoustic guitar and Dobro-driven I Believe in Love. This 12-track release opens with the smoky and twang-y guitars of Punchy, which could easily pass for a Creedence Clearwater Revival or latter day John Fogerty number. And if all that variety isn't enough, the title track has a clip-clopping, honest to goodness reggae beat! This project's true revelation is the way it spotlights Gustafson as an all around great vocalist. Yodeling may have been the vocal skill that brought the man fame, but he can also be a fine deep-voiced singer when he needs to be. Gustafson is closely associated with the modern cowboy music movement, and he includes plenty of cowboy lyrical elements within these songs. Wild Mustang, for instance, speaks about the unbridled ways of an untrained horse, from the horse's perspective. If you have the mental aural picture of Wylie Gustafson as being little more than a happy yodeler, this CD will most certainly expand your perception. This is simply one fine country music album. --Dan MacIntosh CountryStandardTime.com

Wylie Gustafson comes from my part of the world. He raises cattle and horses (including a horse named Captain Beefheart ) on ranches in Eastern Washington and Montana. While he has appeared on the cover of Western Horseman magazine, I know him less for his ranching and more for his music. He writes songs about modern cowboy life and about living in the American West. Plus, I m familiar with a lot of the places he sings about Almota, Odessa, Dusty. His brand new record is Raven On The Wind. The first song, Punchy, sets the tone for this record. Great kick from the drums, surf guitar riffs, snaking lead guitar, and snarling vocal from Wylie intertwine just right. Lyrics about riatas and quarter horses and dallying and cow dogs suggest the Old West, but the sound is all about now. Much of Wylie s earlier work mined the musical styles of the American West including plenty of Western swing, Bakersfield sound, a bit of rockabilly, and some fantastic yodeling. Wylie is, after all, the guy who wrote and performed the famous Yahoo! yodel. Those influences are still here, but this record has a stronger rock component which works really well with Wylie s voice. Plus there s some polka. And flamenco. The band moves convincingly through these various styles, and that in and of itself is a characteristic of the West. As Wylie wrote in the liner notes: I still hang out with some of the toughest ranahans in cowboydom. When I peek into their CD collection, I am always amazed: Jimmy Reed, CCR, Simon and Garfunkel, AC/DC, Bob Marley, the Stones. It s an ever-eclectic mix of sounds and soul. To me, that is what the West is all about. Out here, to be an individual is the highest calling. Another highlight of this record is The Maestro about a woman who embodies the spirit of the West, of individualism, of eclecticism; I want to call this a love song, but it s certainly not a sweetness-and-light kind of love. It s a great blend of both come hither and run away, all set to a musical metaphor. I haven t begun to cover everything good about this record. I could go on about the Rolling Stones cover, lyrics contributions by the great cowboy poet Paul Zarzyski, and the wonderful use of the jaw harp. Wylie has captured the spirit of the West that I know and love. Give his record a spin, and you might understand more about the folks who choose to live out here. Sound clips are available on Wylie s website. And just for fun, here are a couple videos of Wylie from a few years back. One is his band playing Ol Montan and the other is Wylie teaching folks how to yodel at the National Cowboy Poetry Gathering. --Greg Harness WorldMusic: Live Locally, Listen Globally

The path from pollutants in food to a heightened allergic response
Exposure to the heavy metal cadmium is known to irritate the stomach and lungs or cause kidney disease, but new research links another health issue to inadvertently ingesting low doses of the pollutant: high activation of the
Wondwossen Gebreyes elected to National Academy of Medicine
About a decade ago, Ohio State University College of Veterinary Medicine researcher Wondwossen Gebreyes and his team discovered the molecular mechanisms that play a role in triggering bacterial antibiotic resistance.
The Ohio State University College of Veterinary Medicine Recognizes Three Honorary Distinguished Alumni
The Ohio State University College of Veterinary Medicine recognized three Honorary Distinguished Alumni at a ceremony held at the college on October 7.